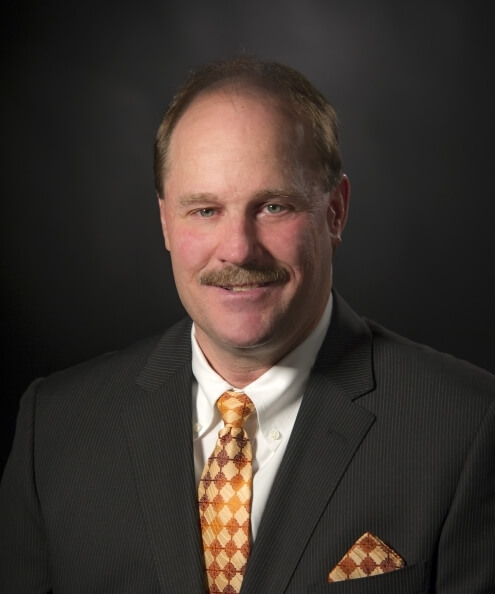 Clint Rusk is head of the Department of Animal Science at Oklahoma State University.  Rusk and his wife, Madeleine, have been married for 36 years.  They are the proud parents of two adult children, Shane and Ashley.

Rusk grew up on his family’s Hereford and Angus ranch near Sun City, Kan.  After graduating as valedictorian of his high school class, he attended Colby Community College, where he was a Presidential Scholar and a member of the national champion livestock judging team.  He graduated summa cum laude from Kansas State University in 1980. After graduation, Rusk returned to his family’s ranch for five years.  In l985, he moved with his family to Fort Collins, Colo., to manage the purebred cattle unit at Colorado State University.  In 1987, he also accepted the coaching of CSU’s livestock judging team. Rusk completed his master's degree in 1992 and his doctorate in male reproductive physiology in 1997.

Rusk coached 10 livestock judging teams at CSU.  His teams were reserve national champions in 1987, 1991, 1993 and 1995.  During his tenure, the team won the National Western Stock Show and the Arizona National Livestock Show four years in a row.  Rusk has coached teams in 66 collegiate contests.  His teams placed in the top five overall 79 percent of the time and the top three in oral reasons 80 percent of the time.

For a string of 36 consecutive contests, the CSU teams, under Rusk’s guidance, placed sixth or higher.  His 10 teams were always in the top six at the national contest in Louisville, Ky. Rusk helped coach CSU’s National Champion Meat Animal Evaluation Team in 1996, along with Duane Wulf. Rusk’s former students have gone on to coach livestock judging teams for CSU, the University of Nebraska, the University of Minnesota, New Mexico State University, Oregon State University, Texas Tech University, and the University of Wyoming.  Rusk was named Coach of the Year by the Intercollegiate Coaches’ Association in 1991 and 1992.

Rusk has been judging cattle, sheep, and swine at the county, state and national shows for the past 39 years. Rusk judged market lambs at Houston in 2006, Ft. Worth in 1998 and at the American Royal in 1998 and 1999. He has judged point shows for Angus, Charolais, Gelbvieh, Hereford, Highland, Limousin, Lowline, Maine-Anjou, Miniature Hereford, Polled Hereford, Red Angus, Salers, Shorthorn, and Simmental breeds.

After completing his doctorate, Rusk joined Purdue University as its youth livestock specialist.  He enjoyed conducting educational programming for 4-H members and their parents for 13 years.  In 2009, Rusk was selected to lead the Department of Animal and Range Science at South Dakota State University.  Over a three-year period, he gained valuable administrative experience working with industry leaders, university professors, successful alumni, and an outstanding group of dedicated students.

Rusk started at Oklahoma State University on August 1, 2012.  He is excited to be a Cowboy and enjoys leading the Department of Animal Science.